Susie Dent and Gyles Brandreth are coming to you LIVE! You can look forward to being cured of your Fernweh (our Purple People know what we mean!), some exclusive off-air content, plus an interactive Q & A!

Event by Somethin' Else
https://ctzn.tk/purplelive

SOMETHING RHYMES WITH PURPLE- LIVE!

With over 4 million downloads to date and winners of Best Entertainment Podcast at the British Podcast Awards 2020, Something Rhymes With Purple is the popular podcast that everyone has come to know and love, hosted by Susie Dent, the star of Countdown's dictionary corner, and author and broadcaster, Gyles Brandreth. Produced by Somethin' Else.

Every week the two delve into a topic around language, offer some words of the week, and offer up fascinating insights, facts and quirky anecdotes.

Last year's round up episode is an excellent example, when Susie and Gyles chose their top words from an extraordinary year.

QUARANTINE
From the Italian 'quarantine giorni' meaning 40 days. Infected ships used to have to wait outside a port for 40 days before being allowed entry.

CORONACOASTER
A blend of coronavirus and rollercoaster. The ups and downs of life during the coronavirus pandemic.

CATCHFART
One who is never far behind the boss and who follows the political wind.

STIFFRUMP
A stubborn individual who resolutely refuses to budge.

LATIBULATE
Hide in a corner in an attempt to escape reality.

Something Rhymes With Purple is available on Apple, Acast, Spotify, Sony Music and all podcast providers weekly. It is produced by Somethin' Else and presented by Susie Dent & Gyles Brandreth.

About Susie Dent
Susie Dent is a writer and broadcaster on language. She recently celebrated 25 years as the resident word expert on Channel 4's Countdown, and also appears on the show's comedy sister 8 out of 10 Cats does Countdown. Susie comments regularly on TV and radio on words in the news. She has contributed to discussions on Radio 4's Woman's Hour, 15 x 15, Word of Mouth, Saturday Live, More or Less, Today, and on Radio 5 Live's Breakfast and Drive programmes, and has been a regular panellist on R4's Wordaholics. She has made guest appearances on many TV programmes including BBC Breakfast, Newsnight, This Morning, Test the Nation, Ant & Dec’s Saturday Night Takeaway, Not Going Out, Meet the Richardsons, and The One Show.

Susie answers notes and queries about words and phrases in weekly columns in the Radio Times and The Week Junior. She has a regular column in the i newspaper, and is the author of several books, including her latest, Word Perfect. She is a spokesperson for Oxford University Press, and has been a judge on the Costa Book Awards and on the Academy Excellence Awards. Susie regularly delivers key-note speeches to both small companies and major corporations on language and communication. She is an accomplished eavesdropper, and is never without her little black book, in which she jots down any linguistic discovery that takes her fancy.

About Gyles Brandreth
Gyles Brandreth is a lifelong wordaholic. The founder of the National Scrabble Championships back in 1971, he is now the President of the Association of British Scrabble Players and his books about words and language include the international best-seller, Have You Eaten Grandma? and another recent Sunday Times bestseller, Dancing by the Light of the Moon. He first met his lexicographer friend Susie Dent in Dictionary Corner on Countdown and still holds the distinction of having been Countdown’s most frequent Dictionary Corner guest. He is a writer, broadcaster, actor, former MP and Government Whip, now Chancellor of the University of Chester and founder of the ‘Poetry Together’ project. Probably best known these days as a reporter on BBC1’s The One Show and a regular on BBC Radio 4’s Just A Minute, on TV he has featured in Have I Got News For You, QI, Room 101,Richard Osman’s House of Games and This Is Your Life, as well as too many programmes featuring the word ‘Celebrity’, including Celebrity Gogglebox, Celebrity Mastermind, Celebrity Antiques Road Trip, Celebrity The Chase, Celebrity Tipping Point and Pointless Celebrities.

As a journalist he writes for the Telegraph and Daily Mail and is a columnist for The Oldie. On stage he has appeared in pantomime, in Shakespeare (most recently in Hamlet and Twelfth Night), in The Importance of Being Earnest (as Lady Bracknell), and in Zipp!, his own musical revue in London’s West End. His novels include seven Victorian murder mysteries featuring Oscar Wilde as his detective (he is President of the Oscar Wilde Society) and he has published two volumes of diaries, two royal biographies, and No. 1 Amazon bestseller The 7 Secrets of Happiness based on lessons he learned from the psychiatrist, Dr Anthony Clare. He is married to writer and publisher Michèle Brown and has three children, seven grandchildren, and lives in London with his wife, several rooms full of dictionaries, and Nala, the neighbour’s cat.

Events upcoming from Somethin' Else 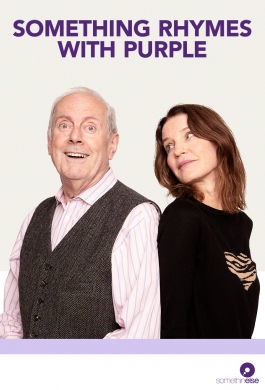